Shadows are very important aspects in 3D space. Shadows enhance spatial awareness of objects in 3D space and give better user experience for players. However, shadow rendering is GPU intensive process. For low-end mobile devices, it will slow down your application. “Fast Shadow Receiver” will make shadow rendering much faster by minimizing the area where shadows are drawn.

“Fast Shadow Receiver” provides a useful mesh search tree called “Mesh Tree” which is used to search for polygons which are receiving shadows. Mesh Tree is useful not only for shadows but also for various purpose such as light projection, bullet marks, AI, and so on.

So, it is better for you to remove shadows from the large object, replace each shadow with a pair of “shadow receiver” and “blob shadow projector”. “Shadow receiver” will generate a minimum mesh to receive a shadow based on associated projector and large environment object (See the image below).

Additionally, Fast Shadow Receiver can also work with shadow-map. However, lighting will not be applied, which makes the shadows not realistic. Shadow-map will be rendered by being multiplied or blended with the scene.

Fast Shadow Receiver is an asset for optimizing Projector performance. It is applicable not only to Blob Shadow Projector but also to Light Projector and Bullet Marks. 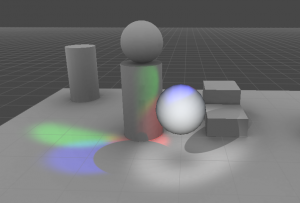 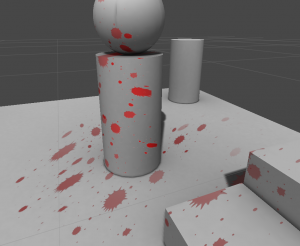