The reason why Projector is slow

This is because all the receiver polygons are repeatedly drawn for each projector, regardless of the projection size.

For example, in Basic sample, there are three shadow projectos and one Plane receiver. 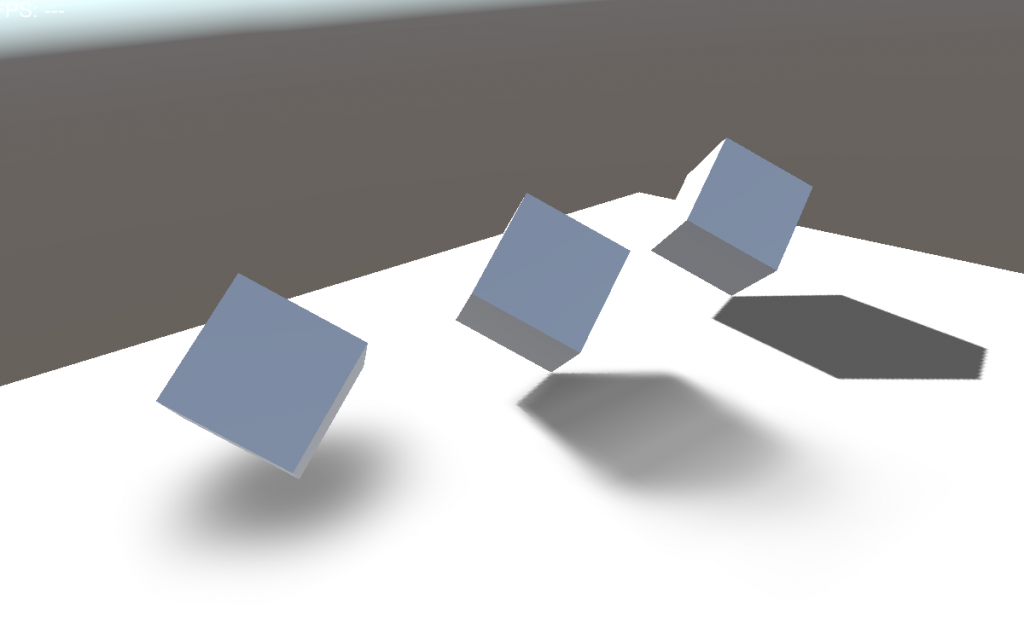 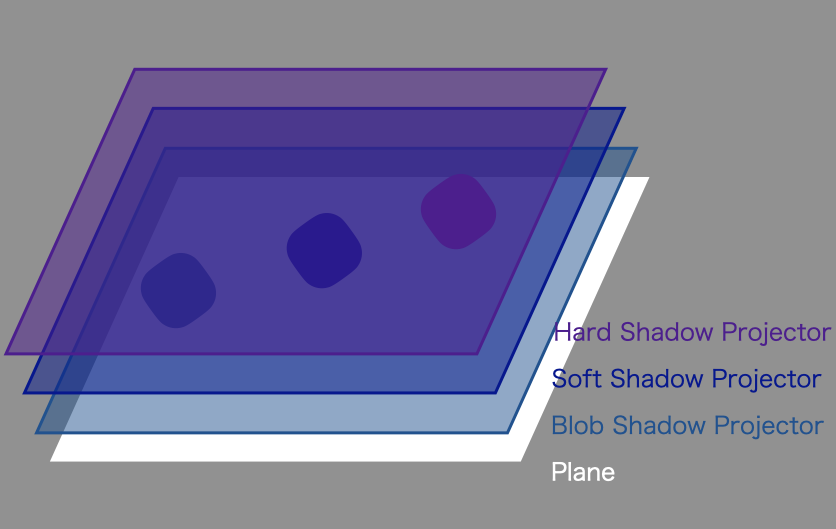 If we can draw only the minimum areas where the shadows are projected, the performance will be improved very much. This is what our Fast Shadow Receiver does!

Before introducing Fast Shadow Receiver, let’s check if the projector rendering is really a cause of the performance issue.

If we can omit only the execution of projector’s fragment shader, we can estimate how slow the projector rendering is. We can do this by replacing projector shader. 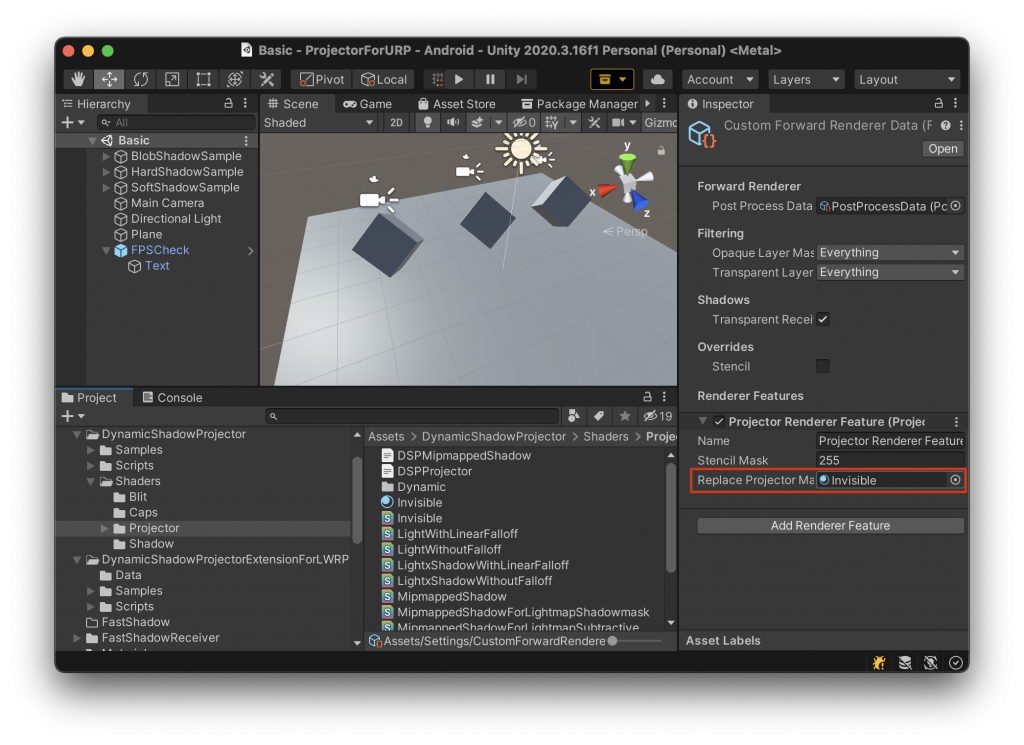 This property is available in debug mode. If you would like to test the performance on a device, please use Development Build.

If using builtin render pipeline, please replace projector materials one by one.

To see the performance, you can use FPSCheck prefab in Assets/DynamicShadowProjector/Samples folder. If needed, you can change the font size and color. 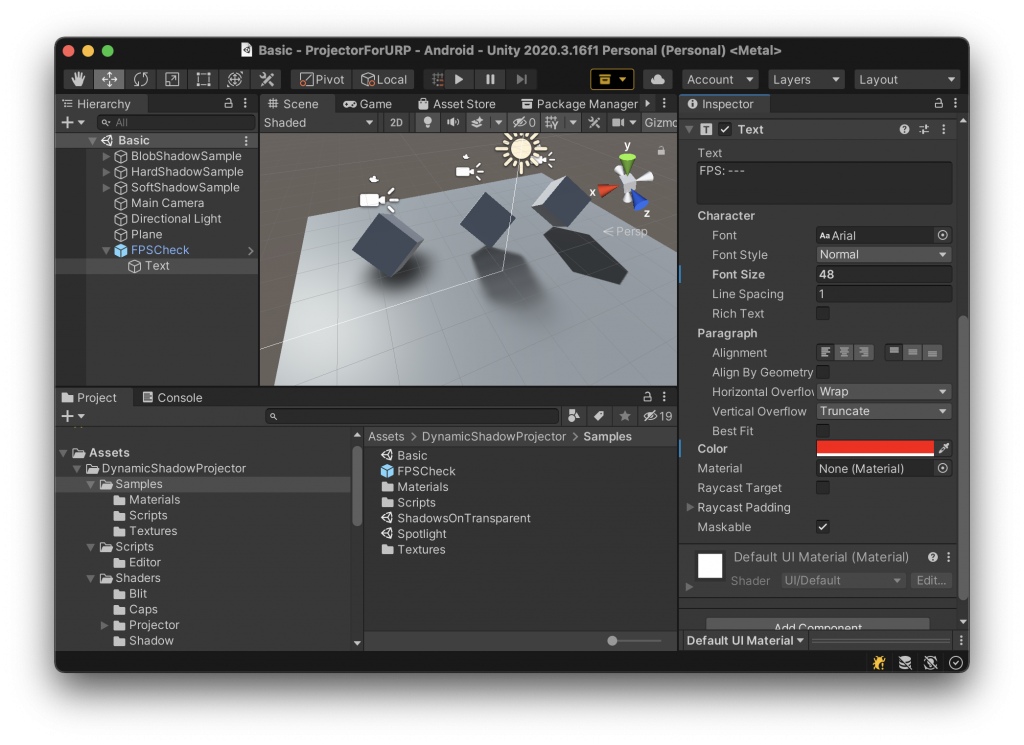 I tested the sample scene on an old android device which has Adreno 305 GPU with 540×960 display. To enhance the impact of the projector shader, I scaled up the plane object.

When projector rendering was enabled, Frames Per Second (FPS) was about 52. When disabled, FPS was about 60. That indicates Fast Shadow Receiver will most likely improve the performance.

If you don’t have Fast Shadow Receiver yet, please install it from Asset Store.

It is easy to apply Fast Shadow Receiver to the scene. Just follow the instructions in ‘Easy Setup Wizard for Projector Manager‘. I will demostrate it here for clarification.

Before that, I would like to add some mesh objects to show that Fast Shadow Receiver can be applied to more complex objects than a single plane. I created an empty game object named ‘Environment’ and put the plane object and some cube objects under the ‘Environment’ object. Those mesh objects are supposed to be Static, and typically, have lightmaps (Fast Shadow Receiver doesn’t require Static flag but relative positions from ‘Environment’ object shouldn’t be changed at runtime).

First of all, we need to add a layer to the scene. 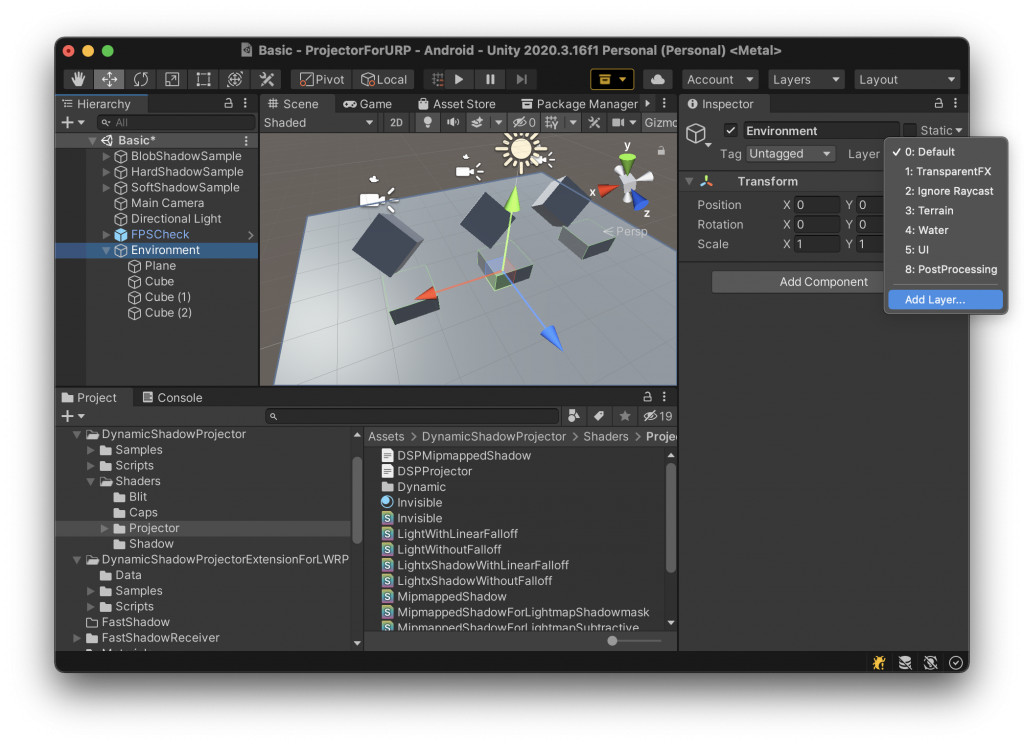 Then, name it ‘Environment’. 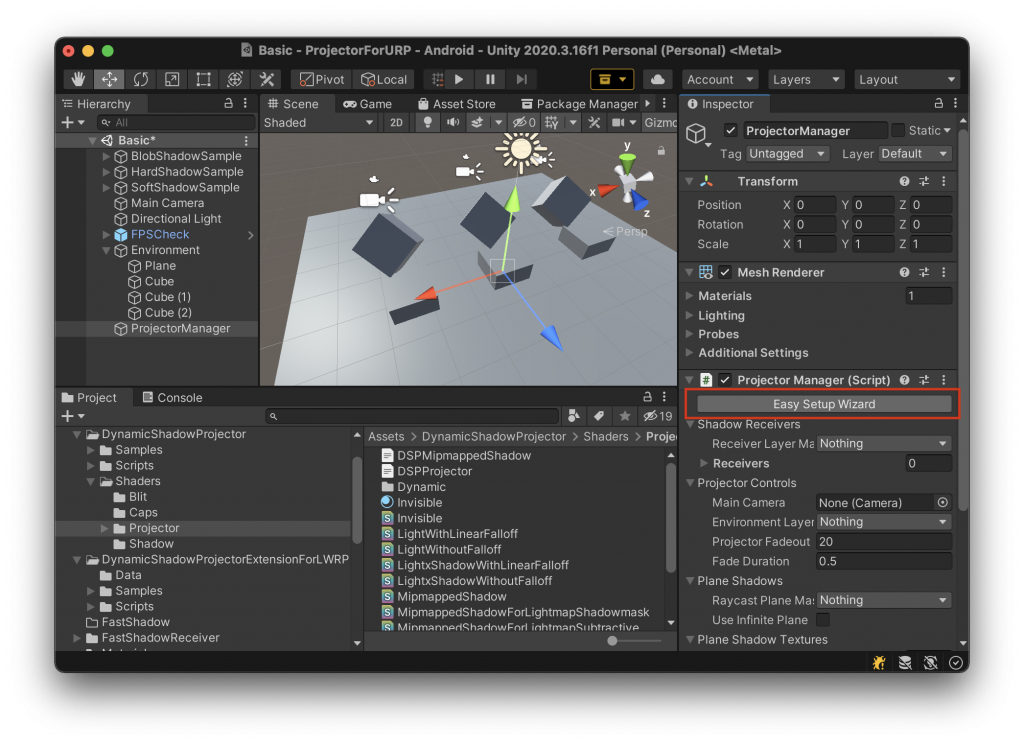 Create a New Shadow Receiver and go to Next page. 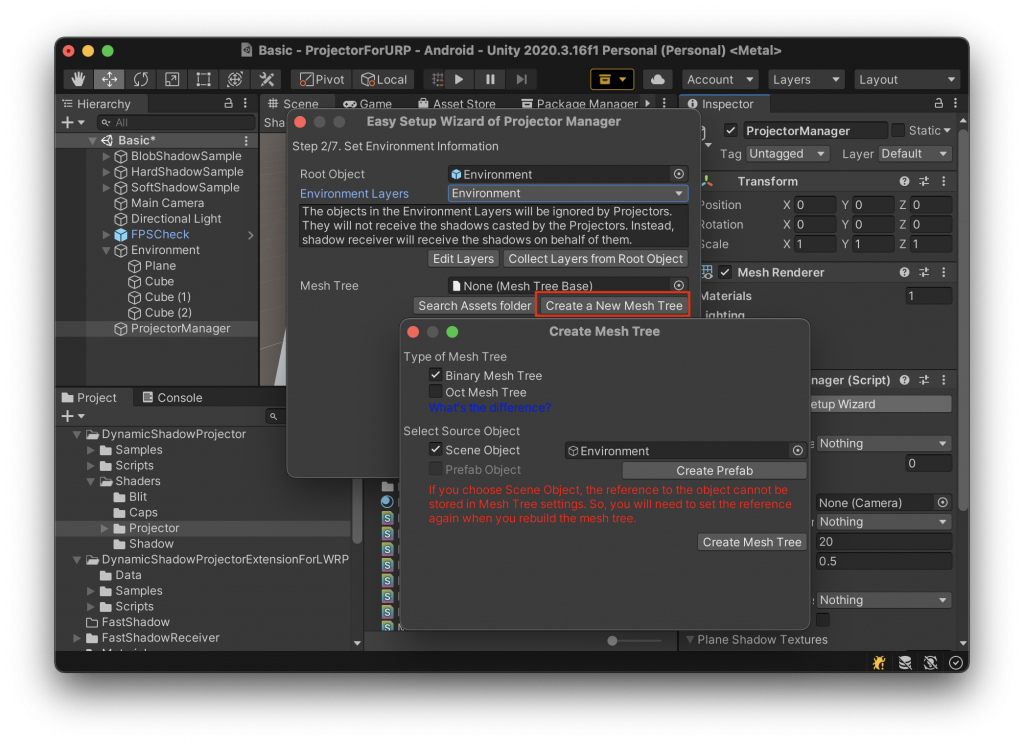 Mesh Tree is an asset data which stores the mesh data of the environment objects in a tree structure so that a shadow receiver can search polygons in the projector frustum.

Click ‘Create Mesh Tree’ button and select a path for the new mesh tree. Then another window will appear. 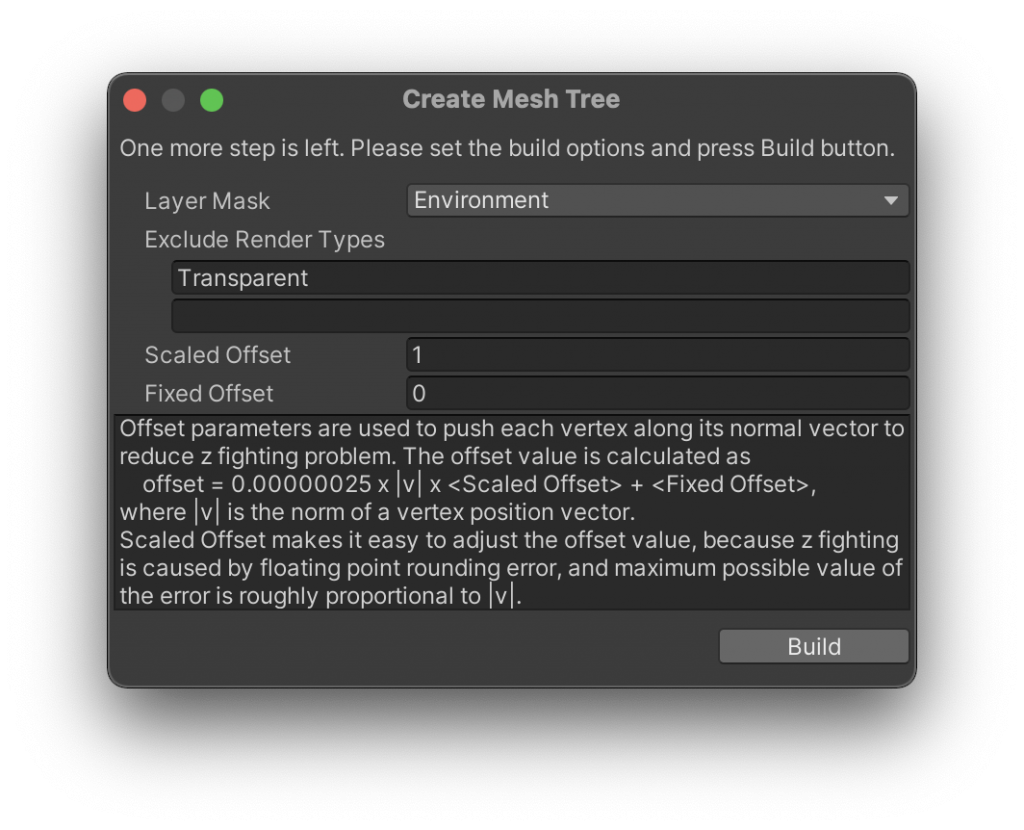 Press ‘Build’ button and go back to Easy Setup Wizard. In the next page, select shadow receiver layer mask. This layer mask is used to assign a unique layer for each shadow receiver. You can leave it ‘Nothing’, then all the unnamed layers will be used. Do the same thing to the scene objects. When using dynamic shadows, you can’t use either Raycast Plane Mask or Infinite Plane.

That’s it. Setup is done.

By using Fast Shadow Receiver, FPS was improved from 52 to 59.